It was the second day back to college today, which is an even bigger reality check. It means that yesterday wasn't just some kind of nightmare, and that there really is only six more months in higher education for me. Scary! Anyway, I don't want to depress you all with work, work, work, so I'll just put up a simple little post about today's outfit.. 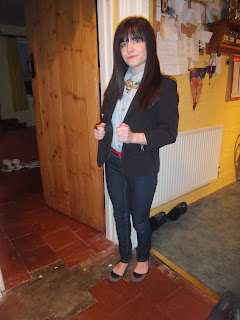 Blazer - ASOS; Jeans - Dorothy Perkins; Shirt - River Island; Shoes - New Look; Belt - Primark; Necklace - Topshop; Ring & Bracelet - Accessorize.There's a first time for everything, and today I tried something I new - double denim. I've always been a little wary of doubling my denim pieces because I don't want to look like an 80s throwback, but I have been seeing double denim on celebrities, catwalks and in magazines, so I decided to go for it. Only yesterday I bought the new issue of Grazia and saw a whole feature on wearing denim the chic way, featuring many double (and even triple) denim ensembles.. I also decided to work a little bit of androgyny in there, because as far as I'm concerned there is still some life in the boy-meets-girl trend. I think what really makes this look work is the detail. Firstly the vastly different shades of denim make the outfit cool rather than matchy-matchy. Also the red belt adds a cute pop of colour, and the statement necklace worn just tucked under the collar looks unusual and adds interest to the plain shirt. Maybe I'll try doubling my denim again sometime... Love and kisses, Tara xox
Posted by Tara India at 17:07